I made that recipe name up and to be completely honest, I just threw some things together one day.
My brother lives in the same city as I. He was going out of town for Easter and had bought a pound of salmon, and had it marinating in olive oil and lemon juice for a few days. He called me, not knowing what to do with the fish, insisting I take it. We were raised with the mentality that you never ever waste food. Even when bread got stale, we’d throw it out for the birds or feed the ducks. When trips approached, my mom would make dishes that involved the produce remaining in the fridge so nothing would go bad when we left, she would also stop grocery shopping to ensure nothing would go bad.
I thought everybody was raised this way but found, much to my horror, that they were not. I discovered this upon my moving to college.
Anyhow, on his drive north, my brother dropped off the salmon so that I would get use out of it.
Dijon Mustarded Salmon 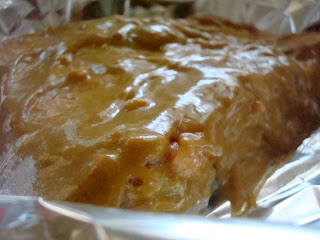 salmon
soy sauce
olive oil
spicy dijon mustard
garlic
(Note, I do not list measurements as I do not really measure things, I like my food spicy so I probably use more mustard and garlic than would another person, so I say, eye ball it, taste it, and it’ll be fine. This is probably terrifying to first time cooks, but I’m presuming most people are not first time cooks)
Preheat oven to 350˚F.
Mix the soy sauce, olive oil, mustard and pressed garlic in a bowl.
Place salmon on a piece of aluminum foil at least 3 times longer than the piece of salmon itself. Completely coat with mustard mixture. Fold up the edges of the foil and pinch over to create a sort of pyramid encasing the salmon, this ensures the salmon doesn’t dry out upon cooking.
Place in oven and bake for about 30 minutes, depending on the size of your fish.
It can be served along side potatoes, and roasted vegetables, or rice and vegetables, or I had it atop a big bowl of mixed greens.
food

Land of milk and honey

What is Salad?
food