We slept in today. Until 8:30. Again breakfast from Mama B’s bottomless sack of food and hit the trail.
The first intended stop was Sahagún, a chocolate shop in Portland recommended to me by a like-minded chocolate lover. It was very disappointingly closed. I had eaten a tiny breakfast in anticipation of good hot chocolate. Oh well. On to our next destination, Portland’s Rose Gardens in Washington Park. I had looked it up on the map before leaving the loft and following the theme of Portland being small and easy to navigate by foot, we had decided to walk. It turned out to be quite the uphill trek. We never found the street on which we were supposed to turn, but asked for directions and discovered we were much closer than we thought. The gardens were beautiful and well worth any hike. After marveling at hundreds of varieties of roses, we found a park bench to read in the intoxicating smell of roses. A very relaxing way to spend the Friday. 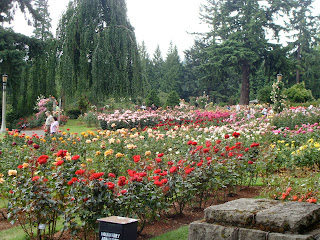 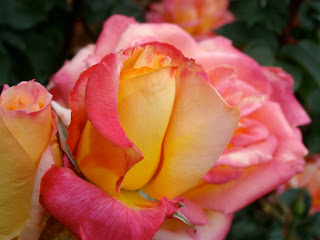 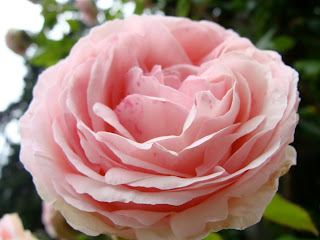 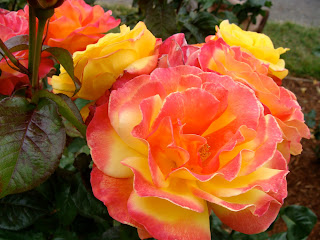 Next we headed down the hill to downtown Portland. We stumbled upon Cacao (at 414 SW 13th Ave.) a chocolate shop we had read about. We went in and were mystified by all of the chocolate. Christina bought some caramels, with which she was very pleased. And we split “A Flight of Three,” which was 3 demitasse cups of drinking chocolate. One milk chocolate infused with cinnamon, one dark chocolate with cayenne pepper and ginger and the third “Rivoli” which was just a dark, 72% cacao drink. All were thick, warm and delicious. The woman who helped us had a bit of an attitude. I asked a question and was rudely corrected by her. Reflecting on her manner outside, as we drank our chocolate, we decided that she had just had a bad day. That was a more pleasant conclusion than her being an unhappy woman, angry with her life. Maybe it was the chocolate.
We decided to go to Powell’s again. We looked up books on Portland for more Happy Hours and Chocolate Shops to visit. Also, Chocolate Shops in Seattle, anticipating our weekend trip tomorrow.
Next we walked around, to be completely frank, we were just killing time until Happy Hour at 4:00 pm. We went into an adorable Vintage Store, Portland seems to be full of them. We also went into Pearl Bakery (at 102 NW 9th St.), which we had read about in a book about great Portland eateries. The service here was beyond exceptional. Brittany, the young lady behind the counter was extremely friendly and after we had made our selection of a ginger cookie and a multi-grain roll, told us to pick something for her to sample out. We chose the Almond Cake. It was perfect. Just the right consistency, dense yet light. It was not overbearingly almondy and had a light orange glaze. The ginger cookie was delicious. It had a crisp rim, the middle was wonderfully chewy and the entire thing was coated in crystalline sugar. I haven’t had the roll yet, that is for breakfast tomorrow morning.
We then headed back to Kenny & Zuke’s Delicatessen (at 1038 SW Stark St), another place recommended by a friend. I’ve found that that’s a great way to travel. Ask all of your friends if they’ve been to or lived in your destination city and what they recommend. But don’t limit yourself to just recommendations and be open-minded. Back to this deli. We had passed by it a couple times and it looked fabulous but also had read in a book that it had a great Happy Hour. Being broke, it was the perfect option. We each had a beer. Christina ordered a cream ale and me an IPA. Christina’s was much better than mine, it tasted like a cream soda! Christina then ordered the Reuben Sliders. I had never had a Reuben before and was very impressed! Again, the service here was wonderful and when I went to the deli to ask the different between the 2 types of lox, the woman behind the counter gave me a sample of each. We spent a good 2 hours there and were very pleased with our experience.
After “dinner,” realizing that I actually only had some of Christina’s Reuben, and a beer, I decided I wanted chocolate. A conclusion I often come to after a mini meal, as I’d much rather eat chocolate than most savory food. So we headed back to Cacao and I had a full order of the Rivoli dark drinking chocolate.
We walked back to the Loft and I fell asleep. I woke up with enough time left in the evening to update this blog and plan our Seattle trip for the weekend.
Stay tuned!
food, travel

Boat ride on the Gulf of Aqaba
family, travel

Boat ride on the Gulf of Aqaba