I was given Mastering the Art of French Cooking for my graduation. It’s a kitchen essential and now my cookbook library has officially begun. French cooking has always been a reach for me. I grew up cooking but everything I made was sort of thrown together and I saw French cuisine as sophisticated, requiring precise measurements and strict abidance to many a rule I was ignorant of.
As a part of growing up, I think we make internal realizations about life and people that explain a lot of things. It’s the “ah-ha” moment. My most recent “ah-ha” moment is that most people do not know what they are talking about and it’s the manner in which they present themselves that convinces you. For example, people will respect you more and are more willing to listen to you if you have good posture. So now I have the means to start French Cooking all I have to have is the attitude to present it. I’m pretty sure I’ve got the attitude down.
So with my new cookbook in hand, I set off to make a traditional French Spongecake. Yes, it did have directions that I followed precisely but, it was so easy to make!
Butter Spongecake (from Mastering the Art of French Cooking)
4 Tbsp. butter
2/3 cup + 2 Tbsp granulated sugar (2 separate measurements)
4 eggs, separated
2 tsp vanilla extract
pinch of salt
3/4 cup cake flower
The directions are spelled out for you, word for word on page 669 of MAoFC, but I’ll tell you how I did it.
Preheat the oven to 350˚ F.
Butter and flour a 10″ cake pan, set aside.
Melt the butter, set aside.
With an egg beater, beat the sugar into the egg yolks, gradually. Continue to beat “until mixture is thick, pale yellow, and forms ribbons.” This means that when you turn the egg beater off and lift it out of the bowl, the mixture will stick to the egg beater and then slowly fall off, forming a ribbon-like lump on the remaining mixture in the bowl. Do not overdo it.
In a separate bowl, beat the egg whites and salt together until soft peaks form. Then add the sugar and continue to beat until stiff peaks form.
The next step I believe is the most important and must be done right. Take about one fourth of the egg whites and add them to the egg yolk-sugar mixture. Sift one fourth of the flour over this and very gently fold until just partially blended. Repeat, this time adding about one third of the remaining egg whites and one third of the remaining flour. Again, gently fold until just incorporated. Repeat again, this time with half of each remaining ingredient. And one last time with the remaining egg whites, flour, plus half of the slightly cooled, melted butter. When partially blended, fold in the remaining butter, paying close attention so as to not add the milky substance at the bottom. Do not overmix! The volume of the egg whites is necessary for a fluffly, spongy texture.
Turn into the prepared pan. Bake for 30-35 minutes. “Cake is done when it has puffed, is lightly brown, and has just begun to show a faint line of shrinkage from the edges of the pan.”
Allow to cool for about 10 minutes in the pan and then run a knife around the edge of the pan and turn the cake out onto a cooling rack. Allow to cool for at least an hour before frosting or glazing.
I did an apricot glaze and slivered almonds along the edges of the cake. Take apricot jam (I used homemade that I found in the fridge) and run it through a tea strainer to get rid of any chunks. Let it simmer in a small frying pan for a good 10 minutes, set aside to cool. Gently roll the outer rim of the cake in the cooled apricot glaze and then gently roll it over a plate with slivered almonds. Set on a platter and glaze the top of the cake.
Voila! 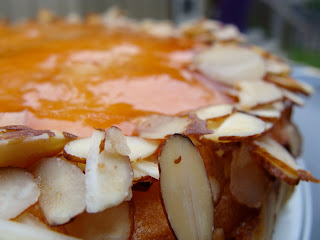