Some friends and I were visiting a mutual friend in Philadelphia last weekend. Before I continue with the story, I have to tell you that my friends and I don’t mess around when it comes to food. We are professional eaters and travel accordingly.

The friend who is studying and living in Philadelphia took the four of us to Famous 4th Street Delicatessen (http://famous4thstreetdelicatessen.com/). He warned us not to eat beforehand, as the portions were huge.

We entered the deli and the first thing that came to my mind was that it was clean and inviting. It was a black and white checkerboard motif with photos of celebrities dining at the deli and black and white photos telling the restaurant’s past. We sat down and were greeted with a bowl of “Health Salad,” a pickled cabbage slaw topped with several big slices of dill pickles. 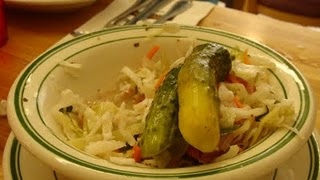 The waitress was not only super friendly but also, honest and took care of us magnificently. She told us what their most popular dishes were, both of which we ended up ordering: the challah French Toast and the Corned Beef Hash. We also ordered a side of Tsimmes, I wanted to know what it was and she described it as a vegetarian kind of sweet stew made of yams, carrots, prunes and raisins. It sounded great. The Corned Beef Hash came with 2 medium easy eggs on top and a side of 2 thick slices of nutty, grainy toast. The French Toast came with 4 potato pancakes. And I had bottomless coffee, which was never empty. 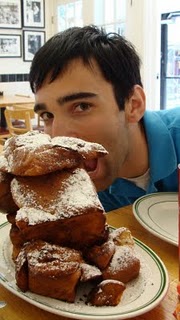 Mountain of Challah French Toast, this was incredible. I must admit, it was my first time having Challah French Toast and I was totally sold. Due to the soft, thick nature of the Challah, it retains it’s sweet softness on the inside and adopts a thin, crisp, outer shell due to the fried egg. And of course, dusted with powdered sugar, how could you go wrong? 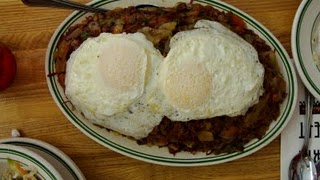 Corned Beef Hash with 2 over-medium eggs on top, I’m afraid to say that this photo does not do the size of this dish justice. The heaping mound of food was a good 6 inches high, at it’s highest point. It was a mix of potatoes, tomatoes, onions and finely chopped corned beef. Definitely a bang for your buck, we hardly put a dent in it and had to take about 3/4 of it home, luckily the waitress had warned us and had even assured us that it would freeze well! 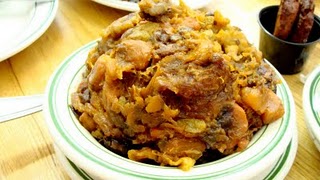 Tsimmes! A hot mound of cooked yams, carrots, prunes, raisins and walnuts. Caution: prunes contain pits. In the background you can see 2 of the potato pancakes

Wait until you see the pastry case. The site of the cakes was incredible. Each standing at about 10 inches high and arranged beautifully, one next to the other begging to be eaten.

On the way out, I saw a couple eating a pastrami sandwich. As my friend described it, it was more like, “would you like some bread with your meat.” There was literally 4 times more pastrami than bread. That also looked delicious but there was no way we could eat anymore.
If you ever find yourself in Philly, you MUST eat here. But, you’ve been warned, the portions are huge and delicious, so don’t eat before and don’t expect to eat much for a long time after.
food, travel