I arrived yesterday afternoon in Santiago de Compostela. It was a long journey: car, bus, airport, airplane, airport, airplane, airport + airport shuttle, airplane, bus, walk. But nothing like the pilgrims that make their way to Santiago de Compostela, nestled in the heart of Galicia, the northwest autonomous community of Spain, these pilgrims travel by foot from as far as Germany but most typically from the Pyrenes in France slowly treking the 780 km (485 mi) to the Cathedral.

I made it to my friend´s apartment and relaxed a bit. I don´t know what I needed to relax from I had been sitting for nearly 24 hours but everybody tells travelers to relax and so I did. Soon enough, I began to feel the itch, that burning sensation inside of me, those of you who can´t bear to be indoors too long, you know what I´m talking about.

I laced up my shoes and headed out. I went to the market and then walked around the old city, I am drawn to the alleys of old cities, it´s like magnetic or something. I like the fact that millions, literally, millions of people for hundreds, sometimes thousands, of years have walked these streets before me. If you just want to think about chance, how many people in x alley in Santiago de Compostela have sneezed, coughed, given birth, laughed, cried, simply were? It´s amazing! I found myself speed walking until I stood across the plaza, facing the Cathedral, and took the picture below, for all of you: 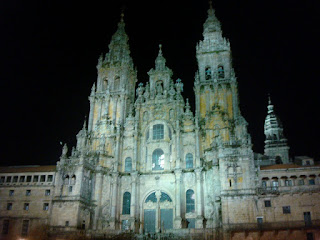 There weren´t as many people at the cathedral at night but it was equally breathtaking, and somewhat enchanting. I marveled at it for a while and walked around the alleys, passing bars and restaurants and fondly recalling the company I was with at each, with Julio/Anton/Inma here, with my brother there, when I was here with my parents we ate there, Laura/her brother and I had drinks there, I smiled to myself and moved on. The bars and restaurants were sprinkled with people and from outside I could hear the muffled sound of laughter and stories being told among friends, my only company outside being the smokers, shunned outdoors as of 1 Jan 2011.

I walked by a tasca (tavern) with a wide open door. Something about it caught my eye. Maybe the menu. Maybe the blue and white tiled floor or the low ceiling. Maybe it was the owner hunched over the bar watching the evening news. I think it was the fact that it was empty and I was alone. I don´t mind dining by myself, I usually talk to people but this seemed like a good fit for tonight. I went in ordered mussles and red wine. I have missed the availability of seafood. I live in a coastal town but the seafood in Galicia is in your face, hard to miss. The food culture is different too, the restaurants, taverns, bars, cafes, etc. are so abundant and affordable that it makes sense to eat there regularly. Plus, everybody else is doing it! 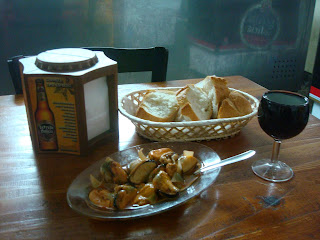 Between bites of mussle atop bread soaked in olive oil, vinegar and mussle juice, I chatted with Luis, the owner. We discussed the near drought Galicia is having, he said this winter is the least rain they´ve seen in 40 years. We shared disgusted looks and comments regarding a Spanish reality show that was playing on the TV. I asked him how to make mejillas a la marinera (mussles a la fishwerwoman), he willingly shared the recipe with me. I´m used to this type of recipe giving, it goes something like this: you put water and mussles in a pot until the mussles open. Then you just add olive oil and vinegar with the mussles until they´re done. Oh and paprika. And garlic. Oh you can´t forget onions. Duly noted.

I slowly finished my meal, savoring every last mussle. I went up to the bar to pay and told Luis I would be back. He gave me his card, the writing was printed off center and crooked, this was for real. I repeated how great the mussles were and that I would try to make them upon my return home. He reminded me of the recipe. This time it was: you just put the mussles in a pot with water until the mussles pop open (I have been taught before tha the ones that do not open are bad and mustn´t be consumed, don´t try to open them, throw them out, they´re not opening for a reason), then you take them out and let them cool a bit. In a frying pan, put olive oil, vinegar, salt and paprika and mix it around with a (wooden) spoon, don´t shake it, you can´t shake it, just stir. Then you add the mussles and chopped onion and garlic. I asked for a clarification on the vinegar and he pulled out the bottle of the vinegar he uses, white wine vinegar.

I thanked him, assuring him I´d be back, and was on my way.

I continued on through the alleys, on my way home. I passed a tavern with a menu outside that was written in chalk, it looked warm and the wooden walls were glowing with life. My gaze was drawn up by the scorching sound of liquid hitting a hot pot in the upstairs kitchen. I could just imagine whoever was cooking, skillfully dumping the contents of a vat into this hot pot to make stew, careful not to spill a single drop.

I´ll leave you with this last photo of the tulips and narcissus, so beautifully budding in the gardens of the old city. 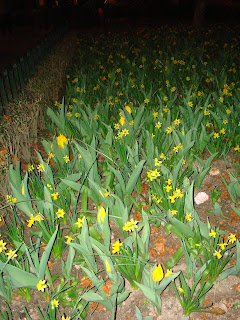 2 comments on “Streets of Santiago”

Let go or be dragged

No good deed ever goes unrewarded