Point Lobos with Papa B

It was a gorgeous Indian Summer day here in beautiful Monterey so Papa B and I decided to go down to Point Lobos for a hike. (For those of you who unfamiliar with the concept of Indian Summer – it’s a phenomenon that occurs in the Northern Hemisphere marked by warmer than expected weather in late-September-November, we definitely experience it here in Pacific Grove).
Point Lobos is a State Natural Reserve a bit down the coast from Monterey.  We headed down and parked just outside of the park and walked in.  There were many people out today, it’s Saturday and a clear day – it’s great to see so many people out!
We walked through the trees, it was a bit cooler than out in the sun and a little darker.  After some time, we saw blue and turquoise through the trees.  Although I have grown up on the Pacific Ocean, I find it amazing how diverse it is – it amazes me every time.  It’s completely variable depending on the weather, the lighting, the time of day, the tide, the wildlife, etc.  Today was especially spectacular. 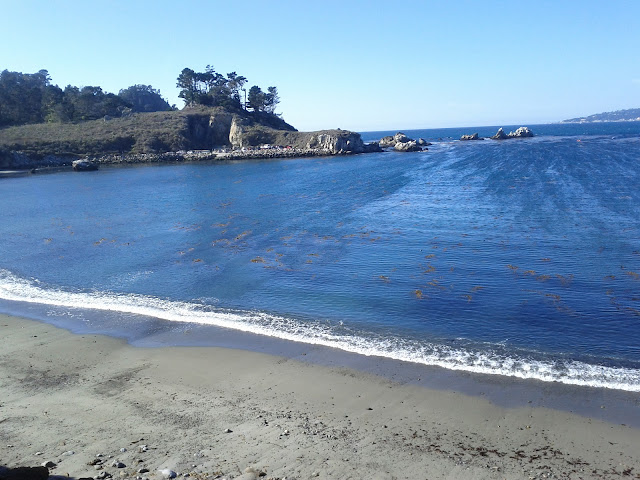 We admired the ocean, told jokes and “hello-ed” people as we passed them on the trails.  Going around a little cove made me think of “Island of the Blue Dolphins” a book we had to read in the 4th grade.  It’s about a Native American girl that lives on an island off the coast of California.  I haven’t read the book in over 10 years but I guess the imagery stuck in my subconscious. There were scuba divers preparing to go out – how cool!  I wonder what all they see down there?
We were lucky enough to see a vulture fly by overhead, its wings spread magnificently with the ends sticking up like fingers.
The water was pretty calm, when the waves were well behaved, the water looked super smooth and the sun reflected brilliantly off of it.
At one point we sat on a bench and admired the coast.  There were rose petals all around the bench and Papa B said there must have been a girl here reciting “he loves me, he loves me not.” 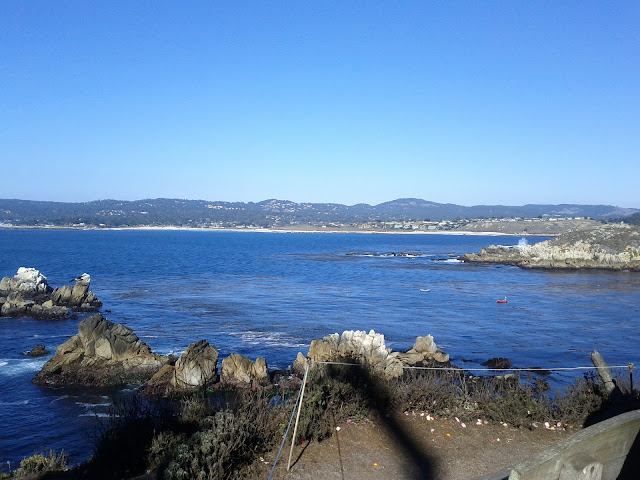 I love seeing the crushed abalone shells in the ground, their metallic color always catches the light just right and reflects up at you.  It’s like a silver, green, pink, purple color.
Eventually we came upon a little cabin with whale bones around it.  One rib was about the length of my height!  There was also what looked like the hip bone of a whale and the vertebrae of a whale.  On the side of the cabin was framed baleen – the filter in the mouths of baleen whales.  (S)He consume a huge volume of water that hopefully has lots of krill in it, the whale then pushes the water out but the krill are trapped in the whale’s mouth – dinner!
Next we went around a different bend and encountered some deer.  It is rutting season for the deer here.  That means they are mating.  This usually happens right before daylight savings time and there is a drastic change in their hormone levels.  They behave abnormally, more agressive, and if they don’t move out of your way – you should get out of theirs.  We saw three young males and clapped at them, they looked at us a bit and didn’t budge, we went down a different trail.
We came upon another bench overlooking another little cover.  There were three seals resting on the rocks.
We admired from afar and eventually had to get down to the water.  Luckily there was a bonafide trail and we slowly made our way down to the rocky beach.  I quickly lost my shoes and socks and tried to run to the water, it was difficult to do on a non-sand beach.  The water was refreshingly cool.  It was low tide and so there were uncovered rocks filled with sea anemones.  You can’t really see them unless you’re looking because they are closed and have bits of sand and rocks stuck to them.  I touched them just to watch them shrivel back – I hope I wasn’t harming them, they’re just so amazing, and I couldn’t help it! 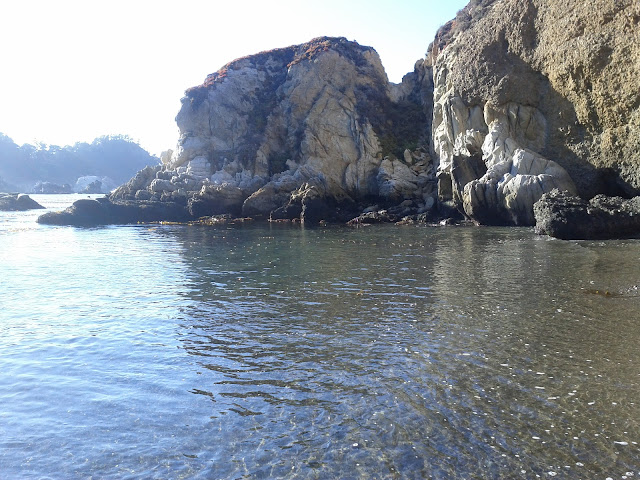 We eventually walked back to the car, retracing our footsteps.  If you are observant enough, you can notice slight changes in the light, coloration, etc. in the trails that you walked in not too long before.  There was the same creaking noise from a tree when we walked back as when we had walked past the first time.  It would stop as we walked by and pick up again after we were past the tree.  I therefore am convinced that it was an animal but my dad claims it was just the wind causing the tree to creak.
California, family, life, Monterey, touristing

Getting Back to Our Roots

Getting Back to Our Roots