3:55 am.  The wind is blowing the Chilean flag that flies over Hostal La Ruca.  The bus is meant to pick me up at 4:00.  I do some stretches in the middle of the street.  It’s not as cold as I had expected.  Down the street, 2 people – gender indistinguishable from their winter gear, appear, also waiting for a shuttle.  I didn’t sleep a wink last night so my body is just going through the motions.  I lean my pack down against the hostal wall.  I pace the street back and forth.  I sea headlights,  my bus!  No.  False alarm.  The wind picks up every now and again and I decide to stand in the corner to shield myself.  The big wooden gate from the hostal opens and I’m startled by a man, “Buenos dias!” I say good morning back, hand over my chest.  He apologizes for startling me and his wife emerges from the dark courtyard.  It’s 4:15 now.  They’re from Santiago, also going to the geysers.  Headlights.  A charter bus passes witout slowing.  Another letdown.

Up the street a guy falls off his bike under a street light.  “Esta tomado” (he’s smashed) comments my companion.  The bicyclist stumbles to pick up his bike.  My companion narrates “Eso es.  Una pierna. Eso, si. Oy, no.  Se cayo de nuevo.  A ver, una, eso, si, y la otra” (That’s it.  One leg. There you go, yup. Oh, no.  He fell again.  Let’s ser.  There you go, yup and now the other). While we are watching, extremely entertained, a tour bus pulls up.  We approach but the tour guide only calls the names of the other two people.  She asks me with which company I have booked, Terra Xtreme, I respond and she says they will pick me up shortly.  My companions climb onto the bus and wave farewell.  I put my pack down again.  I pace.  I stop across the street for a better view of oncoming traffic and think “a watch pot never boils.”  As I chuckle to myself, the street light goes out.  I laugh out loud and cross the street again to the hostal sie.  The light flickers back on.  4:25.  I do more stretches, sing myself a song, and…headlights! Now it’s me.  I get on the bus.  The guide reads my name off a clip board, I climb into the front row seat and start to peel off my many layers.  Beanie, globes, coat, scarf.  We zigzag through the narrow streets of San Pedro de Atacama picking up other groggy eyed tourists, each checking their name with the clip board and sleepily stumbling aboard the bus.  Once we’ve got a full bus and have made our way to the maid road the guide stands up and introduces himself.  His name is Manuel and he is gorgeous.  He wears wide, white-rim glasses and a ball cap.  His legs are clearly mountin-man-muscle legs and his arms are tan, hairless and sculpted.  His upper lip is shaped like an upside down U, exposing his big buck teeth; he has a blonde goatee although the hair on his head is black.  He tells us the plan for the day in Spanish and then in English.  He invites us to sleep as it will be at least 2 hours to the top of the mountin where we will see Los Geysers de Tatio (Tatio geysers).

I’m pumped! I even have my bikini on underneath my many layers because there’s a hot spring that makes a swimming hole and there’s nothing better than being in hot water in the middle of winter.  I curl into a warm ball and pass out against the window which isn’t very warm because it leaks cold air but it’ll do.  I wake up and out of the windshielf I see white specks and streaks over a black backdrop.  For a minute I don’t know where I am.  Ah, snow.  Cool!  Although I don’t know because yesterday the tour company almost didn’t sell me a ticket on account of the weather conditions.  Its 5:30 now.  We arrive at a landing with a few buildings and several other tour buses.  Manuel explains that is’s snowing a lot and we may not make it to the geysers but we’ll try.  He asks if there are any questions.  Yours truly needs a bathroom.  The snow outside is pure, soft powder and it’s not too cold but the wind is picking up freshly fallen snow and swaying it to and fro.  We board the bus again and go on our way.  Several hundred meters up, the bus stops and the driver, Gabriel, tries to start it again, unsuccessfully.  It’s pitch black outside but the ground is snow white.  Manuel gets to up say they’re going to try to get us out of the snow, if they can.  He and Gabriel get out and start shoveling the snow around the tires.  The Brazilians next to me are videotaping themselves telling the story in Portugese and although I don’t understand everything they’re talking about how we’re stuck but we have food and water to get us through should we be stranded.  We are there for about 20-30 minutes and finally Gabriel succeeds in not only starting the bus, but having it move forward.  The Brazilian woman next to me starts clapping.  We go up and up and up.  And then the bus stops.  Gabriel tries to start it but no.  And this time we have that awful smell of burnt clutch.  Manuel and Gabriel get out and start shoveling again.  After 15 minutes, Manuel informs us that we will not be making it up to the geysers, we don’t have chains (mistake #7) and there is simply too much powder, over ice, to drive.  At this point, half the bus is outside making snowballs and taking photos.  Gabriel turns the bus around and we head down the mountain.  It’s dawn now and the sky is changing color by the instand.  We head back down to Machuca (a little lake) to have breakfast.  It’s white, everything white.  The little bushes have soft brown patches around them from where the earth was shielded by the bush.  A vicuña darts across the street.  A vicuña is a member of the camelid family, like a llama, however the vicuña is not domesticated, it is wild.

We stop for breakfast.  White bread rolls, cheeses, marmalades, butter.  Next door someone is frying empanadas and sopaipillas and selling them for 1000 Chilean pesos (2 US dollars).

On our way down the snow patches are becoming less and less.  It’s gorgeous, the adobe colored earth peaking out under a bed of pristine white snow.  Gabriel is now laying on the horn.  Hm?  Maybe it’s a one way road and he’s notifying people coming up the road of our existence?  We pull off onto a dirt road and park.  Gabriel grabs a blue gym bag and takes off; we hear him yelling outside.  Manuel gets up to explain.  Gabriel is Atacameño, a Native American people group of South America.  His sister is one of two inhabitants of the village.  Whenever he does this route he stops to bring her things from town. 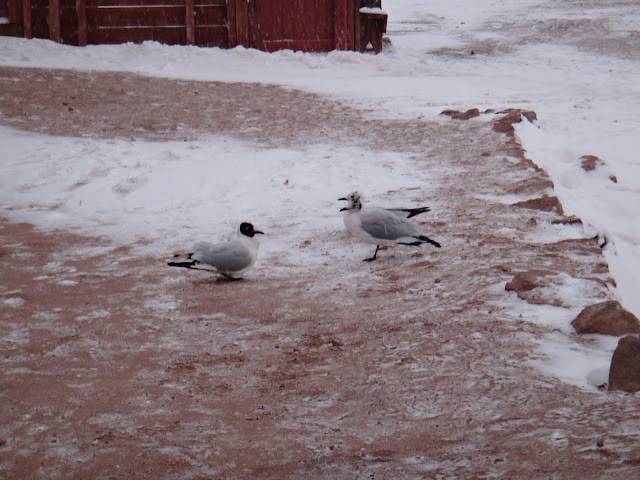 When Life gives you lemons, make a cake
Blog, Postcards from the Kitchen, Recipes

When Life gives you lemons, make a cake