We set  about to see Athens – there’s a lot to see, even if you stayed an entire month I think you would feel like you didn’t see everything. We first took a small tour of the city center with a guide, Dorothy.  We passed the temple of Olympian Zeus, the first Olympic stadium – the Panathenaic Stadium (which is no longer used for the Olympic Games but is where the Olympic torch is lit and begins its journey at he commencement of every Olympic Games every 2 years), Syntagma (constitution) Square and the Parliament which has a tomb to the unknown soldier, We drove around the city, the guide regurgitating facts about buildings that I wish I could share with y’all, but unfortunately do not recall nor did I take notes.  I guess that means you have to visit Athens, too!

The Acropolis: we climbed up to the Parthenon and were given a lesson by Dorothy: the marble used to be painted, we are thankful that the Romans copied us because we know what the statues (that the Byzantines took and used for other things) looked like, much of the decoration of the Parthenon is in the British museum or the Louvre in Paris, etc etc. Next we visited the New Museum of the Acropolis (in which photos are prohibited except on the 3rd floor, which is dedicated to the Parthenon). One small detail that caught my eye was that in the entrance of the museum exhibit, there was a clear glass plate in the floor (the entire floor is glass but it is etched, this particular plate was clear and you could see underneath); there was sand and some ancient, very well-preserved pottery. Dorothy explained that this is a Greek tradition, when you start the construction of a building, you always put something close to you, from the kitchen in the foundation. I really liked that tradition – very symbolic.

You may wonder why the museum is the “New” Museum of the Acropolis.”  This is because the Greeks are trying to get back much of the artifacts from Ancient Greece back from the British museum. The British said (probably in more words and much more diplomatically) “well look at your museum, you don’t even have a proper place to store these priceless artifacts.”  So the Greeks built the new, huge, splendid museum and as far as I understand, negotiations are still underway as to the fate of the Ancient Greek artifacts, especially the decoration of the Parthenon because as it stands now, it is a bit bare – the ornamentation being on display at the British Museum.

Every museum visit must end, begin or have sandwiched within it,  a drink and/or snack at the museum cafe. We sat on the outside veranda which has magnificent views of the Acropolis and enjoyed cappuccinos (mama and me) and a beer (papa b). Refreshed from our break, we continued on to see more! 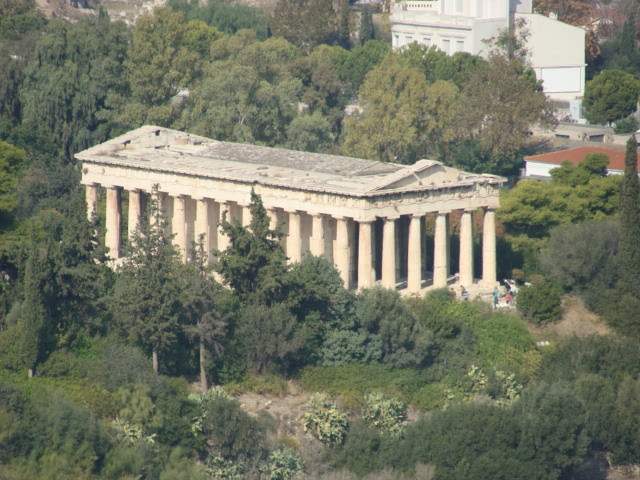 Next stop, tomb of the unknown soldier in front of the parliament building in syntagma square. The 2 guards (Evzones) are dressed in the uniform of the War of Independence (1821); that is, white stockings, a white pleated skirt, and top, a beret and clog-like shoes with a pompom on the toe, the shoes are lined with metal in the bottom, like tap-dancing shoes. Dorothy had told us that each shoe weighs 5 kg! This made the march that the soldiers do all the more impressive – they stand erect (with and expressionless face) and kick each foot up, the leg parallel to the ground, and before lowering the foot back down, they make a circle motion with their foot, like a horse or a bull before charging. They rotate sides periodically and ceremoniously. There’s a third soldier dressed in contemporary uniform who looks after them as they are not allowed to speak or even make eye contact with anybody. About 40-minutes into the hour, they march forward and stand motionless. The modern-dressed soldier examines each one, fixing the tassel that hangs from their hats, their socks and stockings, wipes the swear from their brows and announces to he public, in both English and Greek, “you may take photos with the guards one at a time, please do not try to speak to them, be respectful.”  The change of the guard occurs every hour on the hour but we didn’t want to wait around for 20 minutes so we went off to our next visit, st. George’s church on the top of Lycabettus Hill (the highest point in Athens).

We walked alongside the parliament and then up through Kolonaki, a very nice neighborhood in Athens. Kolonaki is on a steep slope and we walked up the hill passing through restaurants, that had sidewalk seating. About halfway up the hill the road turned into stairs and we were walking up stairwells between residential buildings. The road was lined with lush, green trees; that is one thing (of many) that keeps amazing me, the fertility of the land here. There is allegedly a water shortage but there are foliage and plants everywhere! Eventually we made it to our destination, a funicular station that would take us up to St. George’s church. The funicular was small and cramped and a wave of claustrophobia came over me as we ascended the hill in a dark tunnel; at one point there was a disco ball flashing lights from the walls of the tunnel…seriously, guys? There is the most adorable white church on the top of the hill, a bell tower and a restaurant. We visited the church which fits about 12 people. There was a priest chanting and later incensing and an elderly nun praying. We lit candles and said a small prayer and were off. The view from St. George’s church is incredible, you can see all Of Athens – whose population is 4 million (of the 11 million of all of Greece).

Point Lobos with Papa B